A year ago, Italy was hit by the first COVID-19 outbreak, and every moment since has been fraught with concerns about the retail industry and last-ditch efforts from brands to stay afloat. This season is Milan’s third women’s ready-to-wear season to take place during the pandemic, and it is the second to take place almost entirely digitally. Digital presentations have become the new norm, and with two seasons of experience under their belts, designers proved well-adjusted to our digital-first reality.

Italy’s most notable designers approached this season with a “business as usual” attitude, and many stuck to a traditional runway format, despite having no in-person audience. Though this approach runs the risk of seeming uninspired, the show put on by MM6 Maison Margiela was anything but. Margiela turned the entire format on its head, quite literally, presenting the whole collection backward. Starting with a confetti-filled finale walk and ending with models getting ready behind the stage, the show featured suit jackets with no fronts and jeans turned inside out and reversed. The brand’s PR team even sent out thank you notes days before the video debuted.

Italian designers stuck to what they know best in more ways than one. Sophisticated ruffle collars and bow necklines accented sharp tailoring. Leather and fur were the season’s standout materials, appearing in 36 and 25 shows, respectively. Fendi showed an ample amount of both materials, drawing on the brand’s long history of craftsmanship. One of the most eye-catching pieces of the collection was a floor-length fur coat made of upcycled material.

Drawing on the past to inform the future was a common occurrence this season, and a retro-futuristic aesthetic emerged. Shot in virtual reality and embedded with CGI, Salvatore Ferragamo’s presentation was reminiscent of a Sci-Fi movie. Models sported fluorescent hues, bionic bodysuits, rubberized wool, and heat-processed, chrome-free tanned leather coats as spaceships flew by overhead. Sci-fi fabric treatments met 1970s silhouettes at Versace, where Donatella launched the brand’s new monogram, named La Greca. Geometric monogram prints, shield sunglasses, stick-straight hair, and colorful cat eye makeup represented a window into the future of a brand ready to connect with youth culture without forgetting its past.

Youth was a primary focus at Dolce & Gabbana. Despite showing amid the brand’s defamation lawsuit against Diet Prada, one of Instagram’s most notorious watchdogs, the designers turned to social media for inspiration. Devoting the collection to the e-girl/e-boy communities of TikTok, Dolce & Gabbana developed tactile fabrics reminiscent of virtual reality. Models sported technicolor beauty looks and a wardrobe of larger-than-life puffer coats, metallic pants, and psychedelic sweaters. Raf Simons’s second season as co-creative director for Prada also aimed to connect with the modern consumer. Pat McGrath brought mixed metals to the eyes of models as they paraded down the runway in outfits that were, at once, both easy and elegant. At a small press conference after the Q&A, Prada said, “optimism is mounting,” a sentiment that seems to be slowly permeating through the fashion world.

As vaccine optimism takes hold, so does a vision for the future of retail. For this season, unlike the one prior, there arose an overwhelming feeling of hope as brands put forth collections ready for the world we will re-emerge into. 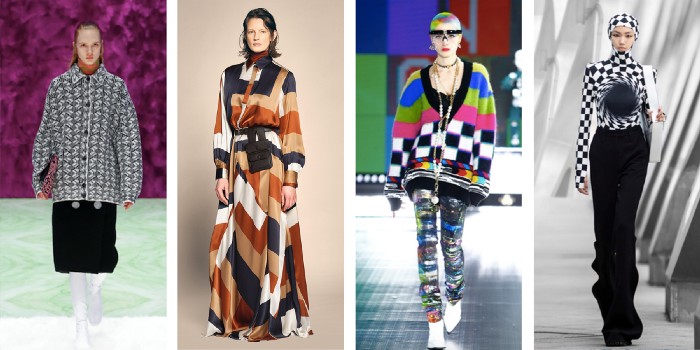 Sharp lines, idyllic colors, and futuristic patterning were ever-present across Milan’s runways. From neon hues paired with digitally-pattened pants at Dolce & Gabbana to swirling checkerboard shapes on a futuristic bodysuit and headpiece at Annakiki, designers were excited to experiment with geometric prints this season. Prada and Kiton also took part in this love affair of shape patterning, but with a less futuristic approach as they relied on subtle warm tones or black and white tones to bring chevron patterning to life. 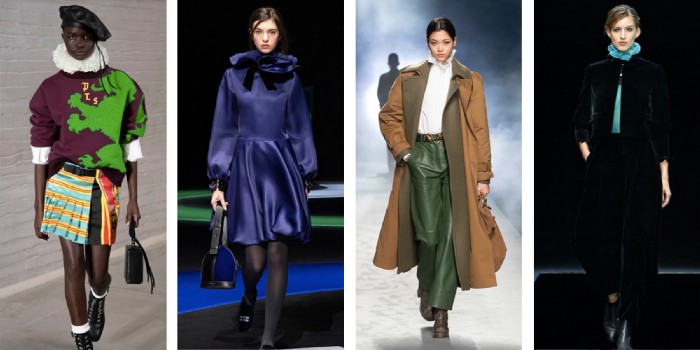 A key detail this season, ruffle collars, brought sophistication and elegance to fall-friendly outfits. Oversized white collars were paired with a crewneck sweater on Philosophy di Lorenzo Serafini’s runway and green leather trousers and a timeless trench coat at Alberta Ferretti’s show. Both Emporio Armani and Giorgio Armani took a more formal and colorful approach to the style as both created blue, high-beck collars to adorn their outfits with. 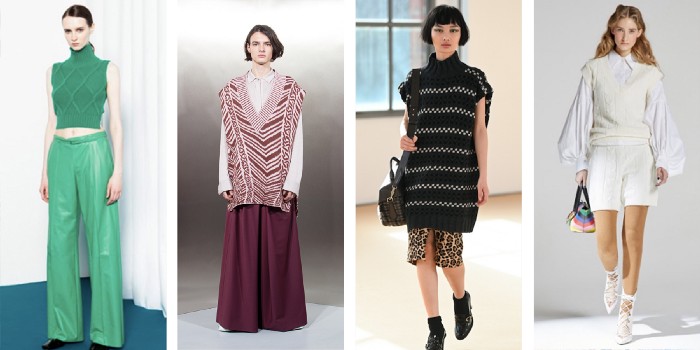 Across Milan’s shows, preppy aesthetics have been elevated with trendsetting silhouettes and hues. Sweater vests, a staple for all things prep, have been reinvented with bright colors and stitching, as seen in Drome’s Kelly green and Anteprima’s burgundy pieces. Though less colorful, the oversized shape of Anteprima’s styles carried over to Max Mara as their white-stitched black sweater vest doubles as a dress. Sara Battaglia opted for a minimalist, clean approach to the timeless staple as she styled her crisp, white sweater vest with a monochrome look.

Back to the Future 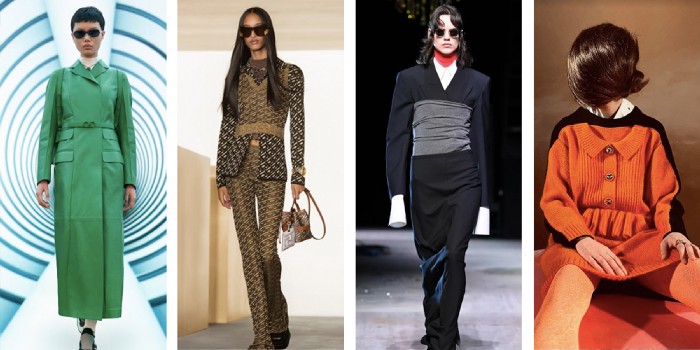 Designers in Milan explored the future through a retro-futuristic lens, allowing the past to inform the innovative looks of tomorrow. Ferragamo’s collection, and corresponding film that integrated CGI and virtual reality, showcased classics updated with a surreal and futuristic spin, from fluorescent green overcoats to biodegradable PVC ponchos. Versace similarly relied on technically-advanced materials to bring their retro-futuristic collection to life, fusing sci-fi fabric treatments with 1970s silhouettes. 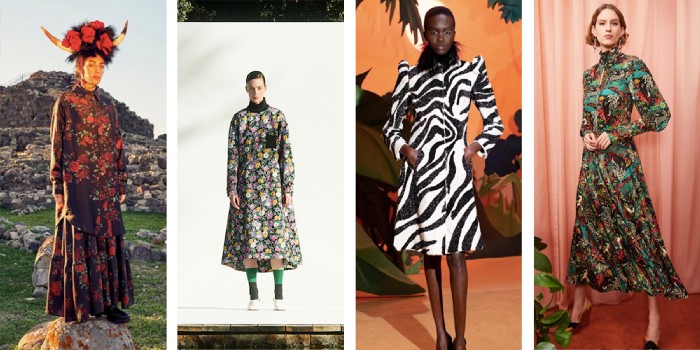 A renewed appreciation for nature, and its healing properties, inspired several designers this season. Seeking sanctuary in nature, Antonio Marras showcased his floral-adorned collection in a mini film set in a UNESCO-protected Sardinian village. Also recognizing the importance of location, Plan C’s lookbook was shot at an elegant seaside resort in Tuscany. La DoubleJ opted to stay local instead of relying on animal iconography to capture the fantasy of traveling to exotic locations like Bali and Morocco.

If you’re interested in our full Fall 2021 runway coverage or want to learn more about trends that are growing — and dying, please contact [email protected]

From confidence boosting attire to experimental outerwear, these are the February 2022…

The Anatomy of a Trend: Biker Shorts

At Trendalytics, our goal is to drive forward-looking decisions by aggregating and…

From lovecore essentials to outdoor apparel, these are the trends that emerged…